The life course being a journey with various obstacles to overcome, and lessons to be learned, is a prevalent metaphor that has achieved almost mythic status. The anthropologist Ronald Grimes claims that ‘we do not escape metaphors, myths, and rituals; we only change them’ (146). Over the course of my previous two posts (Part 1, Part 2) I have sought to apply this metaphor to my own life with the chronic illness Cystic Fibrosis, utilising Joseph Campbell’s model of The Hero’s Journey as my guide. This final post will continue with this application, looking at where this metaphor falls apart and what can be learned from its failure.

Graphic Medicine represents perhaps the clearest attempt to transform negative metaphors of illness into positive ones and is a critically lauded sub-genre of the comics’ medium and interdisciplinary field of study. GP and comic artist Ian Williams coined the term ‘Graphic Medicine’ in 2007. The genre aims to amplify the patients’ voice in medicine, to increase empathy, and to allow medical professionals to express their own vulnerability. Comics in this field are largely autobiographical accounts of disability, chronic illness, and trauma. Since the first conference in London in 2010 an international community has formed around the subject, consisting of doctors, nurses, patients, academics, comic artists, and fans.

It could be said that my movement into the world of comics and Graphic Medicine has similarities to The Belly of the Whale stage of Campbell’s journey, a stage which marks the final separation of the hero from their known world into a womblike space before they embark upon their adventure. The hero is swallowed up and appears to die, only to be reborn again. The womblike space of Graphic Medicine represented an unknown world to me because I was choosing to articulate myself in a medium that I was not familiar with. Looking back at my first comic before writing this series of posts, I was surprised to see imagery that evokes The Belly of the Whale, as well as subtle nods to journeying itself. 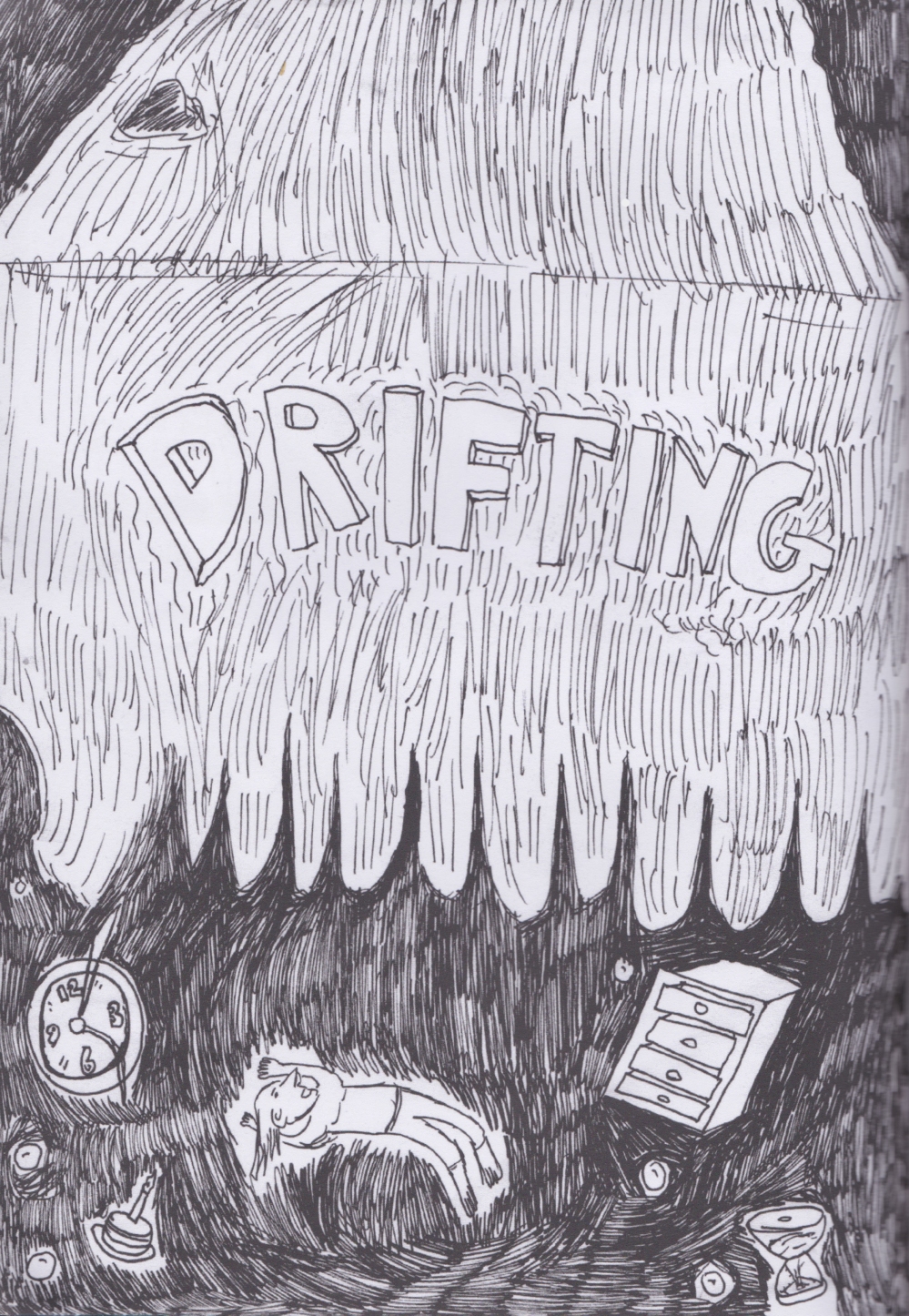 In the above image I am floating aimlessly in a dark ocean, cast adrift. The Heroes Journey is a solitary one, and perhaps my metaphor here reflects that. After all, people with Cystic Fibrosis are not encouraged to socialise with one another due to the risk of cross infection.

This drifting also represents my in-between status as Campbell’s penultimate stage: A Master of Two Worlds. Due to my own relative good health at the time, my fear of death was at odds with the reality of my illness. It remained an abstract concept, sometimes having a negative effect on my treatment based in denial. I was able to pass for healthy and would still prefer to be seen as “normal”. Hence, whereas the hero in this stage is able to pass between two worlds freely, in truth I was a master in neither. 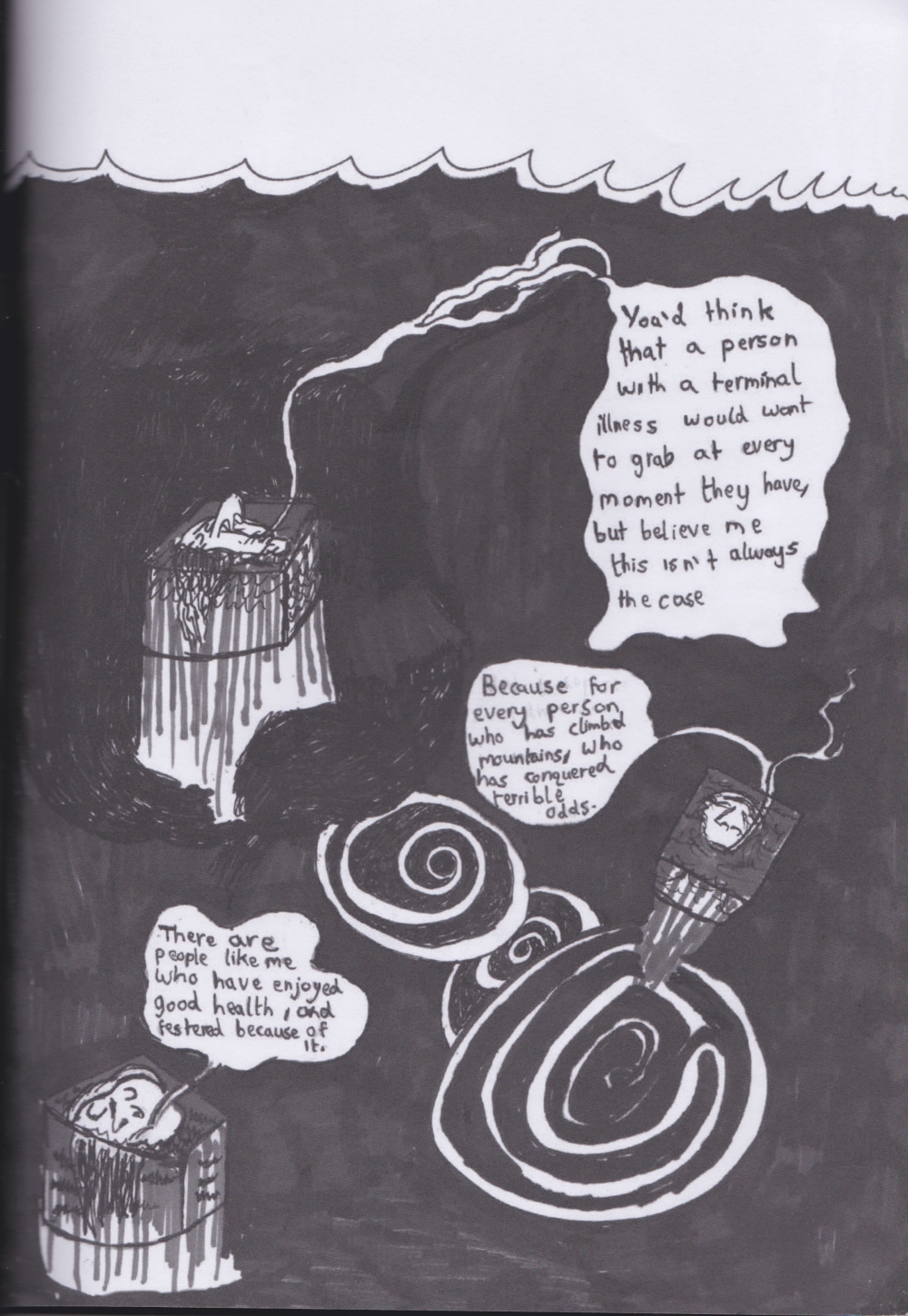 My rebirth came through proper immersion within the world of Graphic Medicine. According to Anne Hawkins, rebirth is another central metaphor when talking about illness (33). Although rebirth occurs individually, in my case it was fostered through community as well as creative practice. Graphic Medicine’s womblike space was nurturing rather than threatening, and full of people with similar experiences to mine.

The explicit visual nature of the comics’ medium means that Graphic Medicine employs playful critiques and subversions of the limits of metaphor. Images of journey in works of Graphic Medicine often employ a more ironic approach to critique the idealistic assumptions on which they are based. I took inspiration from this, turning supposedly positive metaphors against themselves through acts of gross exaggeration. The name under which I self-published my comics, ‘Sicker Than Thou’, was intended to poke fun at mawkish and pitying images of disability that were put forward in the name of bravery and inspiration. This was my moment of Apotheoses, Campbell’s stage of realisation and understanding that precedes the hero finding the ultimate boon of their quest. 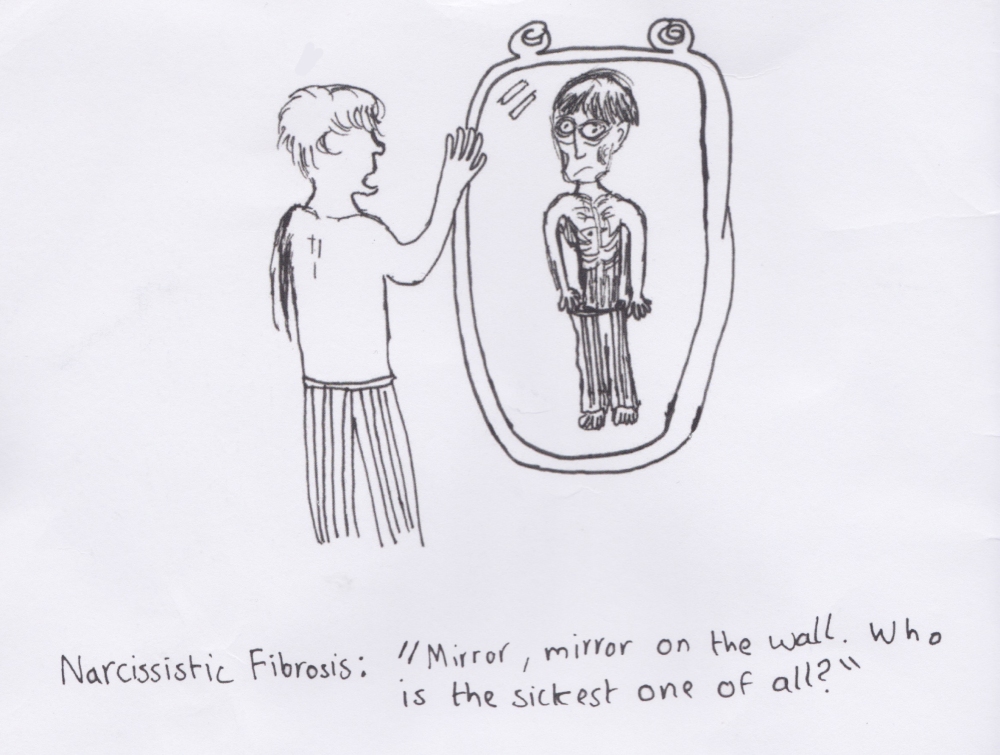 However, looking through my very early comics I also found images of journeying that were presented uncritically, and the same can be said for other works of Graphic Medicine. Whilst these comics frequently stand in opposition to the transformative quest-like nature of illness, and explicitly poke fun at such an idea, this very act of critique runs the risk of being re-appropriated as the boon of which Campbell wrote. The danger is that this critique creates equally unrealistic expectations for disabled people. This in turn can increase the risk of stigmatisation and blame for the patient, and distract from larger societal and political forces that affect their lives. Graphic Medicine as a whole also runs this risk, as its aims are mythologised through a journey of its own, from relative obscurity to critical acclaim. Myth in this case acquires the double meaning of ‘illusion or fiction’, as well as ‘a deeper significance or profound truth’ (Hawkins, 19).

Another downside to Campbell’s model is that it presumes a linearity and finality that is not present in life, let alone chronic illness. Stages appear out of sequence, are skipped over, or even repeat themselves. We often meet obstacles that, instead of being conquered, force us to start all over again and the journey only truly ends in death. The comics’ medium at least offers an advantage here, as it is able to bend and split time through its representation in the space of the panels. This technique offers a closer representation of the fractured experience of chronic illness.

Crucially, these moments of understanding may be revealed to be false, but in turn lead to another level of understanding altogether. This means that the boon of the journey can, and should, always be returned to and rethought in light of new understanding. It is because of this that The Hero’s Journey should not be written off altogether. Despite its flaws it acts as a useful ‘tool to “think by”’ (Grimes, 18). Whilst it does contain its own limitations, it is through these limitations that a greater understanding of restrictive models of illness and disability can be reached. Its application and subversion in Graphic Medicine can equally be used to critique the limitations of this genre and to move beyond them, encouraging multiple moments of Apotheoses in dialogue with one another, correcting and improving continually.