Andrew Godfrey // In 2017 UK based children’s organization Empathy Labs started the initiative Empathy Day. Given that this day fell last Tuesday, and in light of Roanne Kantor’s recent post, I will here expand my previous thoughts on empathy[1] through a review of Anne Whitehead’s latest book on the subject.

Whitehead’s Medicine and Empathy in Contemporary British Fiction (2017) is unusual as it is, as far as I am aware, one of the few books to look critically at the empathetic drive behind the Medical Humanities. It is comprehensive, well argued, and far better able to articulate my reservations regarding this concept and practice.

One of Whitehead’s central arguments is that the Medical Humanities treats empathy as ‘a goal or an end point in and of itself’ (6). Empathy becomes a ‘conceptual stoppage’ which halts difficult and necessary questions such as what exactly is empathy, how does it work, and what are its risks? (Pedwell, 2014, x)

I would argue that this is also a problem that plagues my own field of study, Graphic Medicine. Empathy in both these disciplines is taken as a given, rather than something that is produced. Empathy is used to ascribe a moral value and worth to these disciplines, to mark them as distinct from cruel and indifferent medicine. What this ends up doing however, is it gives empathy an air of scientific objectivity and neutrality, and shuts down certain questions regarding the way in which these disciplines are formed and maintained.

To ascribe scientific objectivity to an emotional affect may seem strange, especially when the Medical Humanities are intended to humanize medicine in opposition to an objectifying disease model, and give greater emphasis to the patient’s voice. However, as the name Empathy Lab reveals, science is often employed to legitimize claims for the power of empathy.[2]

Whitehead’s book critiques what she sees as the shaky science behind empathy, from scans intended to locate where empathy takes place in the brain, to the discovery of mirror neurons. What makes this science unreliable according to Whitehead, is that there is no general agreement among these studies as to what empathy is.

More than this, Whitehead, applies a distinctly Foucauldian critique, by bringing into question the apparent neutrality of this science. In particular she critiques the approach to empathy employed by autism researchers such as clinical psychologist and author Simon Baron-Cohen. Whitehead incorporates responses to Baron-Cohen by both the disability community and the neurodiversity movement to flip his labeling of autistic people as ‘mindblind’ on its head. Instead, it is Cohen who is ‘mindblind’ given that he cannot feel or experience what autistic people feel or experience (36).

The much maligned view that autistic people are incapable of empathy demonstrates another one of Whitehead’s important arguments, that empathy itself cannot be separated from structures of institutional and cultural power. Therefore despite the apparent pureness of the disciplinary push for empathy, it is something that can inadvertently serve constricting and ideological ends.

According to Whitehead, this occurs on a number of different levels. Empathy can be used as a managerial tool, either to make the patient conform to the doctor’s wishes, or as a tick box activity for staff. There is also a tendency in the Medical Humanities to focus on empathy purely in the clinical encounter, a critique Jared Gardner has also applied to Graphic Medicine (2017).

The problem with this focus on the clinical encounter is reflective of one of the problems with empathy more generally. Empathy individualizes, which means it distracts from larger societal and political impacts on the life of the person we are meant to be empathizing with. Individual empathy breeds individual solutions.

The individualism of empathy is one that instead of reaching outwards often reaches back towards the self. Empathy runs the risk of becoming more about the empathetic feelings of the reader/the doctor. Whilst empathy is championed as a means of relating to and understanding those who are different from ourselves, Whitehead argues that this difference is often subsumed in the empathetic connection.

Empathy either becomes about our own moral worth or a practice of projection or appropriation. Whitehead quotes Gallagher and Zahari here, asking ‘When we project ourselves imaginatively into the perspective of the other, when we put ourselves into his or her shoes, will we really attain an understanding of the other, or will we merely be reiterating ourselves?’ (97).

This idea of empathy as projection is built into the very form of the comic’s medium. The urtext of comics’ empathetic appeal, Scott McCloud’s Understanding Comics, reveals the contradictory nature of empathy. McCloud suggests that the more simplistic a character is, the easier it is for us to see ourselves in them. The cartoon character, becomes a ‘vacuum into which our identity and awareness is pulled…an empty shell that we inhabit that enables us to travel to other realms. We don’t just observe the cartoon, we become it!’ (36)

The image that accompanies this claim shows the young boys head dominating the outline of Mickey Mouse that is on the TV. In other words, he does not recognise this character as distinct, but he projects his own identity onto it. 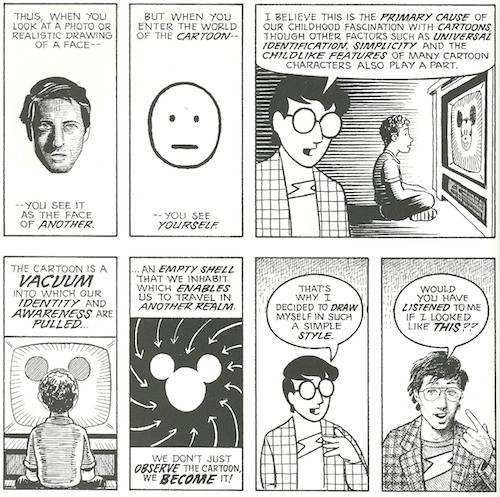 This projection need not been seen as an altogether negative thing, but means that we should think beyond empathy as the purpose of the Medical Humanities and Graphic Medicine. These comics and works and literature can provide road maps for readers in difficult situations, falling more in line with what Norman Holland calls ‘identity theme[s]’ (120).

Holland suggests that readers approach texts with their own baggage and adapt what they read in response to their own fears and concerns, in order to help work through them. In doing so, the readers then recreate their own identities through the text.

The question remains then whether such an active engagement with empathy can take place through the Medical Humanities. Whitehead believes it can, and I am in agreement. Her argument that literature is not a place for empathy to be fostered, but to be questioned and challenged, is something that I believe should be applied to Graphic Medicine as well. Katie Polak makes a similar argument in her book Ethics in the Gutter: Empathy and Historical Fiction in Comics (2017) in which she suggests comics are able to pose the difficulties inherent in empathy and ethics, especially with regards to power and positioning.

In conclusion Whitehead’s book is a brilliant conversation starter which should be required reading for all those engaged in the Medical Humanities. The need not to be rid of empathy, but to think critically about how we use it, starts here.

[1] See part one and part two of my post The Limits of Empathy.

[2] Although this scientific backing isn’t altogether present in Graphic Medicine.