Medicine, philosophy, and law entangle in Professor Jesús Velasco’s study of the science of the soul, as he takes for his central question the law’s interest in the soul. How did the law become interested in the science of the soul? What kind of things does the law do with such a science? The soul provided a meeting point for many disciplines in the Mediterranean basin of medieval and early modern Europe, and Professor Velasco (Professor in the Department of Latin American and Iberian Cultures at Columbia University) examines the soul as the locus at once of thought, of physical knowledge, and of memory. As legal codes took the soul as both a horizon of inquiry and as a legal subject, legislation appropriates the science of the soul.

A story from the Andalusian philosopher Ibn Tufayl (ca. 1105-1185) illuminates the contiguities between medicine and philosophy in the consideration of the soul: raised by a gazelle on an island south of India, Hayy ibn Yaqzan seeks to locate the origin of life when his gazelle mother dies, dissecting her in his anxious search for that mysterious something else which might be life itself. He finds only the gazelle’s heart, and begins vivisecting other animals, eventually to glimpse a steamy mist taking flight from the body when he cuts a heart open. Apprehending this mist of the soul becomes challenging in medieval Europe, given the semantic instability surrounding the concept of the soul. The polysemic nature of the concept—the Greeks wavered between psyche and pneuma; the Romans had both anima and spiritus; Hebrew and Arabic likewise had multiple terms, synonymous and often conflated—and the various interpretations of it in different disciplines (philosophy, medicine, theology, law) show, ultimately, that the question of the soul was a complex co-production across traditions of thought and practice.

The legal discipline’s interest in inventing the soul relates to its need to address that part of bodily experience which is invisible and intangible, although felt. Since the law concerns itself with individuals not in a biological or biographical sense but as agents who do things in the world, it relies on the persona ficta of the legal subject; and in order to legislate upon and govern this legal subject, the law must have access to his immaterial faculties as well as his material body. As the law appropriates the science of the soul, a legal soulscape emerges. The soul stands, in effect, at the center of a triangle composed of politics, medicine, and law. 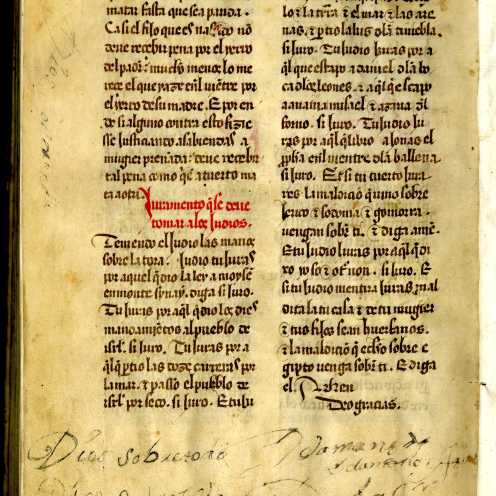 Excerpt from the Siete Partidas

For an example of a moment in which a legal soulscape becomes codified, Professor Velasco turned to the Siete Partidas of Alfonso X, the vernacular legal code from thirteenth-century Castile. In the Second Partida, Alfonso defines the people as the kingdom’s sensitive soul—a move that Velasco sees as entirely novel in the legal archives. The admission of the soul into law, importantly, permits the legislation of memory. As Aristotelian philosophy, which Alfonso takes as his foundation for constructing his legal soulscape, posits memory as one of the internal senses of the soul, the legislator can now take memory itself as a juridical issue. Memory accrues legal and political dimensions, and the invention of the soul allows the law to access a person’s perception and memory for its own purposes, turning the natural person into a juridical person.

Dr. Rishi Goyal (Director of Medicine, Literature and Society Program and Assistant Professor of Medicine at Columbia University) responded, with an interest in the implications of Professor Velasco’s subject for contemporary science in light of recent attention to near death experiences as a legitimate area of scientific study. Can there be a study of the neurocognition of the soul itself? General responses from the audience touched upon questions of methodology, and probed further the idea of mechanisms of surveillance enabled by the legal cooption of the soul.

Ami Yoon is a graduate student in the Department of English and Comparative Literature at Columbia University.