In the image that accompanies the title page of Aristotle’s Compleat and Experience’d Midwife (1700), the birthing chamber is depicted as a room full of lively, fleshed-out bodies, warm and inviting from the fireplace to the small animal sleeping in front of it. The baby is not pictured at all; the experienced midwives gather around the pregnant woman, who lies in what looks to be a rather comfortable bed, although her body seems tense and rigid, likely from the experience of childbirth, one that Linda Pollack, writing on childbirth in the period, describes as “fraught with obstacles and dangers from beginning to end” (40). She is surrounded by experienced professionals, family members, and friends while their hands tend to her during this painful, transformative time. 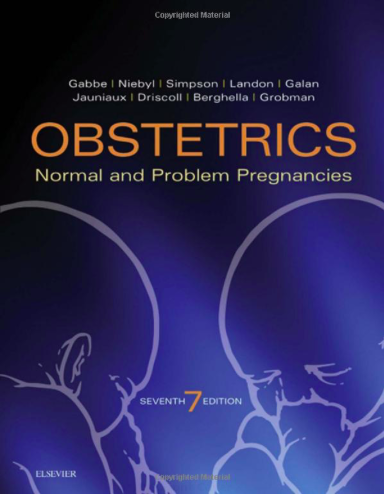 The cover of Obstetrics: Normal and Problem Pregnancies (2016) tells a very different story; the scene depicts the outlines of two babies, one facing the onlooker, the other facing away. There is little indication these children are unborn, other than the word “pregnancies” hovering above them. Their eyes are shut, hands shoved in mouth, mirroring one another. Their silhouettes are ghostly, outlined against a dark blue background; they are detached from the pregnant body necessary to sustain them.

The purpose of these manuals is to act as a reference for obstetricians, “the branch of medicine dealing with the care of women during pregnancy, childbirth, and the post-natal period” (“obstetrics, n.” OED Online). In this respect, the cover images are perhaps less important than the numerous facts, studies, research, flowcharts, key points, and other references the manuals contain. I argue, however, that the ghostly, seemingly unborn children on the cover of Obstetrics reflect the modern conceptualization of pregnancy, upholding what queer theorist Lee Edelman would call the figural Child, and the reproductive futurism these  innocent, unborn children represent. The obstetrician’s focal point has become the imagined child and its future; consequently, pregnancies are categorized as “normal” or a “problem” based on how the pregnant body in question fails to nurture and sustain this child.

This conceptualization, one that centers on the child, undoubtedly affects the choices obstetricians make, how they care for—talk about and tend to—pregnant bodies. But what constitutes a normal pregnancy? A pregnant body that does not fail in some way? If this reference book’s heft is any indication, the profession is groaning under the weight of “problem” pregnancies. As a woman who recently carried a pregnancy to term, I find it hard to believe that any pregnancy, let alone most pregnancies, manage to meet all of the criteria this reference text outlines: from fifteen to forty pounds of weight gain, to maintaining one’s blood pressure, to delivering at or around “full” term, the rules and regulations regarding what a pregnancy should look like far outweigh the number of times the pregnant body is actually depicted in its entirety. (In the images that do show pregnant women in Obstetrics, they have slight smiles on their faces, demonstrating “improper use of a lap belt” or the like (576).)

My own pregnancy was a problem; due to two early high blood pressure readings, I was subjected to testing twice a week for much of my third trimester. These tests consisted of growth scans, in which a machine measured my baby’s body parts, as well as the “non-stress test” (NST), a test that decides whether or not a baby is in distress by measuring their heart rate. The non-stress test gets its name from the more violent test it replaced, the stress test, one in which women were put under bodily stress—induced contractions—in order to measure the baby’s response. Eventually, physicians figured out these methods actually induced labor and replaced the stress test with the non-stress test. At the time, I was told by ultrasound technicians that growth scans estimating a baby’s weight could be off by two pounds, and after research, I discovered that both tests are often inaccurate, if not totally ineffective, in indicating whether or not a baby is in distress. (See Ben-Haroush, Li, and Rahman for just three peer-reviewed studies demonstrating this.) Despite the known failures of these assessment practices, pregnant people become subject to more expensive testing, more monitoring, and, in many cases, scheduled inductions and surgery, based on the results of these tests—based on keeping the unborn child, and its future, intact.

As I heard countless times from doctors and nurses, “Why risk it?”

Without a doubt, the medicalization of childbirth that began in the early modern period, and the developments made by modern medicine, have eased the wild and strange journey of pregnancy for countless people, saved many lives, but what has been lost in this process? As many pregnant people can attest, the stark bifurcation between the descriptors “normal” and “problem” fails to capture the complexity inherent in this bodily state, which, according to Maggie Nelson, “profoundly alters one’s ‘normal’ state, and occasions a radical intimacy with—and radical alienation from—one’s body . . . an experience so profoundly strange and wild and transformative” (14). In other words, all pregnancies are a problem in that, to quote Madhavi Menon’s definition of queer, they “militate against the obvious, the settled, and the understood”—they cannot “be fully or finally grasped” (9). The cover of Obstetrics sterilizes the messy, astonishing process of giving birth, literally removes the bodies most necessary to the process.

In order to start to ask better questions, questions that re-center the care of pregnant people in obstetrics, I turn back to the early modern period, to a different manual: The Compleat Midwifes Practice Enlarged (1656). Within the pages of this reference text is an image of a “flowering” woman. The “flowering” woman looks to the side, not directly at viewers. Plants grow up and around her legs, covering her genitalia; her stomach is cut open, blooming outwards to reveal the child, her skin appears to be petals marked with veins. Her left hand holds a flower while her right hand is open, facing upwards. The pregnant body, here, reminds surgeons that they must cut a living body open in order to gain knowledge of and access to the child, knowledge that technology has made more—but not totally—available. 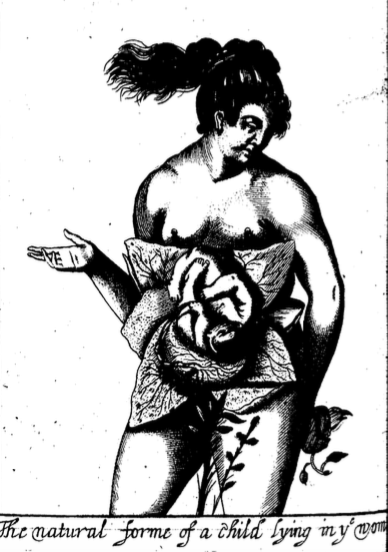 This image, the woman who looks away from the obstetrician’s seeking knowledge, reminds me of the extended metaphor for “knowing” that Jack Halberstam proposes in The Queer Art of Failure: “In place of the Germanic ordered forest….we might go with the thicket of subjugated knowledge that sprouts like weeds among the disciplinary forms of knowledge, threatening always to overwhelm the cultivation and pruning of the intellect with mad plant life” (9). For pregnant people and medical practitioners alike, considering “the thicket,” the problematic “weeds” that sprout up around the illusory vision of a “normal” pregnancy, should be at least as important as asking, “why risk it?” over and over again—that is if we want pregnant people to begin to experience the warmth, care, and concern extended to the Child and its promise.

Menon, Madhavi. Shakesqueer: A Queer Companion to the Complete Works of Shakespeare. Durham: Duke UP, 2011.

Pollack, Linda. A. “Embarking on a rough passage: the experience of pregnancy in early-modern society.” Women as Mothers in Pre-industrial England. Ed. Valerie Fildes. London: Routledge, 1990.