Professor Benjamin Breen (Assistant Professor in the Department of History at University of California, Santa Cruz) delivered the penultimate lecture in the fall series of Explorations in Medical Humanities, addressing opium as an historical object across the centuries in Europe. Despite its popular connotations as an exotic, eastern drug, opium emerges—ironically enough—native to Europe, and Professor Breen traces the earliest hints of it to Neolithic France and Spain. The sixteenth and seventeenth centuries saw the beginnings of opium’s exoticization and orientalization, turning opium into a foreign and suspect object, and we live with the repercussions of such thinking even today, as perspectives on opiates continue to be ambivalent. 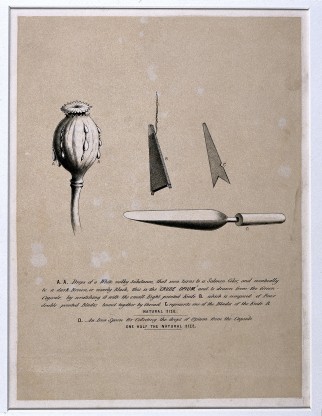 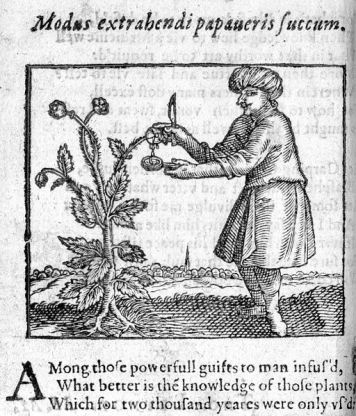 1580 can be considered a loose date for when opium starts becoming orientalized in cultural perceptions, but long before that the papaver somniferum existed in present-day Germany and France, where opium seed pods from as early as 5000 BCE have been discovered. The opium poppy propagated with the spread of agriculture during the Neolithic era and beyond, and archeologists have uncovered funeral sites in Spain with evidence of a ritualized burial of opium pods, dating to approximately 3500 BCE. The intentional burial practices provide strong support for the argument that the opium poppy was no longer simply a weed, but an object of some cultural significance. Professor Breen suggests that the opium pods’ incorporation into funereal practices may refer to people’s awareness of their painkilling properties. He also debunks the popular notion that Sumerians had access to opium before Europeans and that they called the poppy their “joy plant”—Cypriot merchants carried opium to the Near East, and the Sumerians’ supposed “joy plant” alludes, in fact, to the cucumber.

During the early modern period, European merchants began trading opium seriously, globalizing it as a part of larger colonial trading missions. Opium smoking appears to have derived from Portuguese smoking habits, and Professor Breen believes that the key invention in the history of opium is the invention of the water pipe, a distinctly early modern invention of technological sophistication, with origins in East Africa.

It was also during the early modern period that the association of opium with Turkish culture emerged, possibly caused by Europeans’ wariness of the growing Ottoman Empire. Perceptions of opium intoxication altered to depict it as producing violent actions, and transcription or translation errors in manuscripts served to continue exoticizing opium by describing its effects on non-Europeans, effectively turning opium into a foreign and frightening drug.

Europeans of the nineteenth century paid extensive attention opium, refigured as opium alkaloids of different names, as a scientific object for study and experimentation, particularly with the discovery of morphine in 1804 by Friedrich Sertürner. Such research began to take off in earnest around the 1830s, with caffeine and nicotine molecules likewise isolated in quick succession, and the chain of discoveries in chemistry remade the culture surrounding opium. Not only did European natural philosophers frequently experiment with opium, but debates raged about its effects on the brain and the body, and many Victorians unwittingly developed addictions to opiates, as substances such as morphine and heroin were often administered in doses to babies and children. The period’s emergent theory of mind converged with the surging interest in chemical manipulation of opium and addiction rates, despite the ongoing association of the drug with eastern cultures. Such notions still shape the way we see drugs today, with a lingering bifurcation: opiates as illegal substances, and opiates as pharmaceutical substances. This split became more formalized over the course of the twentieth century, but we can clearly see that the trend of treating opium with suspicion began a long time ago, in the early modern period with the rise of early modern states.

Ami Yoon is a graduate student in the Department of English and Comparative Literature at Columbia University.